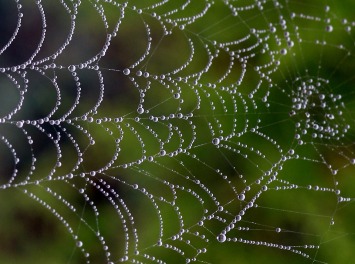 A while back, I wrote about the “just right” conditions necessary for the formation of fog. That particular post discussed the scattering of light, which is done by materials such as titanium dioxide (the principal pigment in white paint) and clouds (where water droplets do the scattering). The birds are chirping at sunrise and the vernal equinox has already passed, which means the sun is finally in the Northern Hemisphere and the days are getting longer and warmer—and all of this points to the beginning of another building season. That got me to thinking about a few other “just right” conditions that seem pertinent for this time of year. And, once again, water comes into play.

It—water, water vapor, dew, rain—seems so innocent, common, and necessary that one would hardly consider it an aggressive material. Without it, however, one would avoid corrosion and other moisture-related phenomena. Although corrosion is a horribly complex topic, let’s agree that water’s role in the corrosion mechanism is critical to failure. But there are two other examples of water’s role in failure mechanisms for prepainted metal: wet-stack storage and weathering.

We know that failure occurs when a nested stack of building panels is delivered to a job site and improperly stored. Somehow, water (most often from rain) works its way into the spaces between the panels. Under conditions that to this day are not fully understood, the moisture—those rather innocent-seeming water molecules—make their way through the topcoat (or backer), primer, and pretreatment and begin to react with the metal substrate to form white rust, which is a zinc oxide corrosion product. Try duplicating this effect in the laboratory! Neither a salt spray nor standard humidity test produces the volume of fluffy white rust that one sees on improperly stored building panels. And, of course, not all improperly stored building panels show these white rusting conditions. Clearly this is an example of yet another “just right” condition for failure. Our industry has done everything possible to educate users about proper storage, and we know that certain pretreatment-substrate combinations minimize the effect. But the problem persists—albeit only occasionally—so this is one of the remaining issues that the next generation of coatings scientists can look forward to tackling.

It is known that coating degradation occurs when moisture, heat, and UV radiation (from sunlight) are present. Panels exposed in Phoenix compared to panels exposed in South Florida perform considerably better, even though there is greater heat and UV in Phoenix (because of consistently clearer skies). Without moisture, the degree of weathering of coatings is less in Phoenix than in Florida. You would be right to conclude that without rain (no rain in Phoenix!), coatings will not weather. But the necessary moisture needed for degradation to occur has other sources besides rain.

The Ford Motor Company has done excellent work to show that a coating must become saturated with water for significant degradation to occur. This saturation level is typically expressed as “% weight gain.” For most crosslinked coatings, that saturation level is around 5% weight gain. Ford’s work showed that the “just right” condition for our favorite nemesis—water—is not rain or humidity, but dew. And it makes sense. Florida gets plenty of rain, but typically not more than one or two hours a day at most. But dew is a different story. With the consistently high humidity, dew point temperatures in Florida are high enough that panels (or buildings, or cars) begin to form dew at around 9 or 10 p.m. and stay wet until 8 or 9 a.m. That’s nearly 12 hours every day, from spring through fall. That’s how much time is necessary to saturate a coating, according to Ford’s work in creating a new accelerated weathering standard (ASTM D7869): the test requires 12 hours of wet time each day.

Ford also found that this saturation level is exactly that which also causes mechanical failures such as delamination of an automotive clear coat, which nearly all cars have these days. As water is absorbed into the film, the coating wants to swell. But if the coating is stuck to whatever lies beneath it, it can’t swell much, and substantial stresses build up. When the coating dries out during the day, the stress is relieved, only to build up again when the coating becomes saturated with moisture. Repeat this cycle a few hundred times, and delamination could become the favorite stress relief.

Granted, we don’t have this delamination problem much in our industry. Our coatings are more highly crosslinked and less permeable to water than a typical automotive coating. The purpose of this discussion was not necessarily to detail water’s role in weathering, but rather to elevate the awareness of its role in the service life of a coating. The simple water molecule can be surprisingly complex (remember that water, unlike nearly every other compound on Earth, expands as it cools below 39 °F). Be open-minded and aware of the possibility of a “just right” condition where water may be operating behind the scenes.